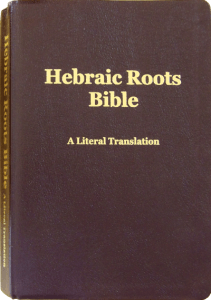 Here for the very first time is a literal translation of the scriptures with the sacred name of Yahweh and Yahshua, restored and preserved. We have just finished printing the brand new second edition of the Hebraic Roots Bible that is now filled with thousands of study notes and even color maps and a topical concordance in the back.

Did you know in every bible translation including the King James Bible that our Heavenly Father’s personal name Yahweh has been taken out and replaced with titles and even names of pagan deities more than 10,000 times?

In the printed edition, you will notice that the order of the books in the Pre-Messianic Scriptures (Old Testament) are in the Hebraic order with Torah (Law) first, then the Nebi’im (Prophets), then the Kethubim (Writings). This makes for a learning curve for most people who are used to the traditional English versions. The names of the Heavenly Father and His Messiah are in Hebrew letters. Also, the names of persons in scripture are more accurately transliterated into English. For instance, “Jacob” is “Ya’aqob”.

The King James Version of the Holy Bible

The King James Version (KJV), commonly known as the Authorized Version (AV) or King James Bible (KJB), is an English translation of the Christian Bible for the Church of England begun in 1604 and completed in 1611. In 1612, the first King James Version using Roman Type was issued. This quarto version is only second to the 1611 folio KJV.

1612 First KJV bible in quarto size, courtesy of Shiwei Jiang. First printed by the King’s Printer Robert Barker, this was the third translation into English to be approved by the English Church authorities. The first was the Great Bible commissioned in the reign of King Henry VIII (1535), and the second was the Bishops’ Bible of 1568. In January 1604, James I convened the Hampton Court Conference where a new English version was conceived in response to the perceived problems of the earlier translations as detected by the Puritans, a faction within the Church of England. The translation is considered a towering achievement in English literature, as both beautiful and scholarly.

The American Standard Version of the Holy Bible