What is the true story of Easter? 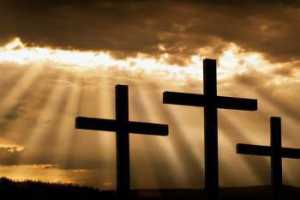 The Easter story that is believed and practiced be most Christians just does not make sense to me. Okay, so that is my opinion based on what I have read and researched over the past several years. It also does not make sense to me as far as logic, common sense and historical facts go. So from this point on, I will take a look at what I have learned and what my opinion is on this subject…

From what I was touched and most Christians practice is that Christ was crucified on “Good Friday” and rose on ” Easter Morning”. Well, I find several things wrong with this whole theory and/or teaching.

First let us take a look at the ” Words of Yahshua Messiah”. Yahshua said in “Mark 9:31” – For He taught His disciples, and said to them, “The Son of Man is betrayed into the hands of man, and they will kill Him. And being killed, He will rise up on the third day.” HRB

So the question here is this, did Yahshua tell the truth, if He did not, then the whole word of YHWH is false… Think about that…  So how could the Messiah be crucified on Friday and rise on Sunday morning?? Well, maybe because Easter is not a biblical holiday and just something man has decided to create. Let take a look at what we actually celebrate on the three days we call Easter weekend.

First, let us look at Maundy Thursday, the day the Messiah had the Last Supper (according to the Gospel of Matthew, the Passover meal). There lies the first problem, according to Hebrew tradition and the Torah, the Passover is a Holy festival and start on the night of the day before and goes until the night of the festival, just like the Sabbath. The Passover celebration is actually 7 days long. So how did the Hebrews take part in the “trial” of the Messiah? Second, if the Messiah was actually crucified on Friday, since Friday was still only the second day of the Passover festival, this still leaves a big question. When was Passover in 33AD?

Well lets look at the when was Passover in 33 AD.. The chart below shows the date and day of the week Passover accrued in 33 AD.

The following astronomical data in the first three columns below was obtained from the U.S. Naval Observatory Astronomical Applications Department. The pertinent file may be accessed on the Internet at http://www.usno.navy.mil/USNO/astronomical-applications/data-services/spring-phenom .

Note. The times of day given in the second and third columns have been adjusted +2 hours from U.S. Naval Observatory figures to account for the difference between Jerusalem Israel and Greenwich England (universal) time.

It should also be noted that the first evening of a visible crescent moon (column 4) always occurs only minutes after sundown, which is at the very beginning of a new day on the Hebrew calendar.  This Hebrew day correlates to the following day on our Gregorian calendar as noted in the chart below (column 5). Column 6 is Passover dates for the given years.

**   Conjunction occurs too late in the day for crescent to be seen from Jerusalem the next evening.

Well according to that chart, Passover Saturday April 4th. So how can the last supper be on a Thursday??? And how could the Messiah be crucified on Friday. We the Passover/ Last Supper has not happened yet? How can the Messiah rise from death on Sunday when He was not crucified?

So in conclusion, I’m a little confused, how can the Easter celebration be correct? I’m not saying that what is posted here is the absolute truth, but with this evidence it makes me think. Along with thinking and additional research, I do believe that what is being taught in church is wrong. So if it is wrong then why is it being taught. Is it not the purpose of our lives to seek the truth?  Yahweh’s truth not mans.