The Origin of marriage and what it should be

Marriage –  where does it come from and what it was… 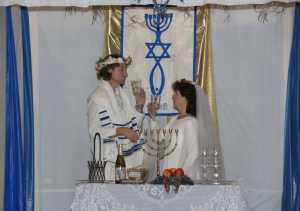 The concept of marriage is found in the Bible, that’s right, the Bible, marriage is not a secular concept, it is a biblical concept. So with that in mind let’s take a look at what today says what marriage is.

Marriage today is more of a secular concept. There are many reasons people marry today, fame, financial security,  etc.. The concept of marriage has been twisted to the point that it hardly resembles the original concept, and thus many people today are at a place where they do not believe in the concept of marriage anymore and just end up living together.

Let us take a look at the origin of marriage and how it all became to be. In Genesis 1: 3  HRB

21 And YAHWEH Elohim caused a deep sleep to fall on the man, and he slept. And He took one of his ribs, and closed up the flesh underneath. 22 And YAHWEH Elohim formed the rib which He had taken from the man into a woman, and brought her to the man. 23 And the man said, This now at last is bone from my bones, and flesh from my flesh; For this shall be called Woman, because out of man this has been taken. 24 Therefore, a man shall leave his father and his mother, and shall cleave to his wife and they shall become one (echad, unified) flesh. 25 And they were both naked, the man and his wife, and they were not ashamed.

Yes, this is the start of marriage, not the courts and not society or culture. 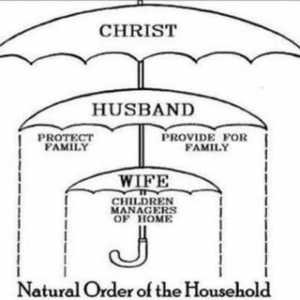 Now that we have established the origin of marriage, let’s dig into what marriage should be and how we should view marriage from the biblical view. Marriage is the union of a man and a woman, this union is a berit before Yahweh. We see the word covenant in the Bible today, but the two are not equal, they really do not have the same meaning. The word “covenant” means “business deal,” or “contract,” and implies a promise to deliver one end of the contract if the other end is met. The relationship implied by the term “berit” is the relationship between a lord and his servants, for in Hebrew, a “berit” is a promise that is made unilaterally by a lord to his servants that he will protect and provide for those servants. The promise is not required by law nor forced on the lord by his servants—it is entirely voluntary.

So now that we know the difference between the two, this really changes the way we are to look at marriage as a whole. The husband is to lead the family, to provide for his wife, to take care of her and to protect her. So with these tasks that the husband is to do comes great responsibility by the husband to his wife. Let’s take a look at each and see what is the biblical aspects of each.

As a king, do you not rule over your own kingdom? Our kingdom consists of our home and our work. It really does not matter how big or small your kingdom might be. We still rule over it. So then as we ask the woman to marry us, we bring our queen into our kingdom. And that way we fulfill the requirements that are listed above.

A wife’s obedience to her husband

Many husbands understand the ” A wife has to be obedient to her Husband”, well let us take a look at this and see if it actually true or just another wrong teaching.

He said to the woman, I will greatly increase your sorrow and your conception; you shall bear sons in sorrow, and your desire shall be toward your husband; and he shall rule over you.( Yahweh’s judicial order)

Wives, submit yourselves to your own husbands, as to our Master,  because a husband is head of the wife, as also Messiah is Head of the Congregation, and He is the Savior of the body.  But even as the Congregation is subject to Messiah, so also the wives to their own husbands in everything ( wife’s responsibility).

Likewise, wives, be submissive to your own husbands, that even if any disobey the Word, through the behavior of the wives, without a word they will be won,  observing your pure behavior in fear.  And adorn not yourselves with the external ornaments of curls of the hair, or the wearing of golden trinkets, or of costly garments.  but the hidden man of the heart, in the incorruptible adornment of the meek and quiet spirit, which is of great value before Elohim.  For so once indeed the holy women who were hoping on Elohim adorned themselves, submitting themselves to their own husbands,  as Sarah obeyed Abraham, calling him Master; whose children you became, doing good, and not being confused by false values.(Gen. 18:12)  And you husbands, likewise, dwell with your wives according to knowledge, and hold them in honor, as the weaker vessels; because they also will inherit with you the gift of eternal life: And let not your prayers be hindered. And, finally, let all live in harmony, that ye be sympathetic with them who suffer, and affectionate one to another, and be merciful and kind.

Now that we have established that the Bible does require the wife to be submissive and/or obey her husband, let’s take a look at this. the actual word used in the biblical text is Shama` – means to listen or to hear. I have not found anything that shows that the wife is to be a slave to her husband. On the contrary, the woman was made from man to be his helper. And with all the responsibilities that the husband has, making his wife a slave or servant, is contrary to his responsibilities to her. Also, submission also does NOT mean that anything that goes against the Word of Yahweh shall be obeyed to. Just remember that the Husband and/or King also has to submit to his Queen.

Husbands, love (Yeshuah used the word ahava) your wives, even as Messiah also loved the Congregation and gave Himself up on its behalf (husbands responsibility),

Now that we have established the structure of marriage, let’s take a look at the marriage process. As soon as the husband proposes to the wife, you become husband and wife. How do I come to this conclusion? Well as soon as we accept the Messiah as our Lord and Savior, we become His bride. And in the same way that He goes and prepares a place for us, we are to prepare a place for our bride. Now here  is the kicker, in Yahweh’s eyes we are married to our bride from the time she excepts us. That means we become married and are subject to Yahweh’s law on marriage. Not ours or socialites. That means dating others or even bachelor  parties are wrong. We are subject to the law about adultery..  We are to abstain from sex  until the wedding night. We are to live apart until after the wedding. Yes  I know that I just ruffled a few feathers. But the truth is, if you are committed to the Bible then you need to follow the Bible. And if your response now is “Well these are the commandments given to Israel, not the gentiles”, the I have a questions for you. I assume you are a Christian and believe you are grafted to Israel, we if that is the case, then you are also committed to there commandments. Many of us forget the part about being grafted into Israel.

One last thing, as I stated this post, I showed you in Genesis that woman was created for man. To be his help mate and his companion and to give him company, well that means WOMAN is a gift from your Yahweh and needs to be treated accordingly. A Gift from Yahweh.