The Hebrew word for Love 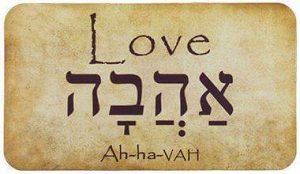 The Hebrew word for Love is Ahava The root of Ahava is Hava, which literally means “to offer” or “to give”. It also shares a root with the word, Ahav, which means “to nurture”, or “to devote completely to another”…Ahava (love) is not an emotion, it’s an action. Love in its purest form is not something that happens to us, it is a condition that is created when we give of ourselves..

And the second is like it “You shall love your neighbor as yourself.”  HRB

now replace the word love with  the meaning of the word Ahava in the scripture above, the entire commandment has a whole different meaning. Doesn’t it? And most likely the Messiah used this word since his native language was Hebrew. This is why it is almost impossible to read the Word in any language but the original Hebrew to get it’s true meaning.

Yes I did say Hebrew, not Greek or Latin and definitely not English, there is so much lost when you read Scripture in a transliterated bible, and in 21st century ideals, it really is “Lost in Translation…..”